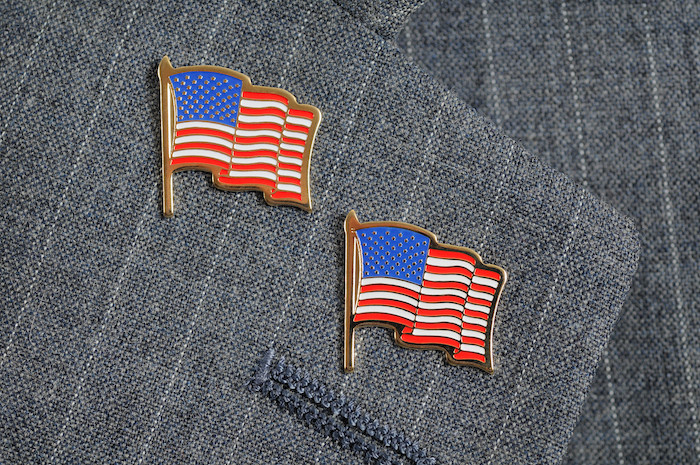 American flag pins can be seen everywhere these days. Politicians are expected to wear a pin with the stars and stripes, and it has become quite normal to see folks donning the iconic symbol. American flag pins are incredibly popular, especially for national holidays such as Memorial Day, July 4th, Veterans Day, and more.

While the pin has grown in popularity, the history of the American flag pin started after World War II. Flag lapel pins started emerging in the 1950s, and it didn't gain in popularity until after the war.

While lapel pins have been around for much longer, flag pins are relatively new by comparison. The American flag pin can now be seen on men's suits, women's jackets, and more. Richard Nixon was the first president always to wear an American flag pin. He got the inspiration from a character in the Robert Redford film The Candidate, who displayed one on his suit jacket.

This was during the Vietnam War, and many anti-war demonstrators began wearing a flag pin upside down in protest. The American flag pin certainly has its place in history. It can be seen in a variety of styles and with several unique details.

Here at the LapelPinSuperstore, we've been making American flag lapel pins for years. We have the experience and a talented team of designers and graphic artists who will create the perfect pin for your particular needs.

American flag pins are perfect for national holidays and commemorations, as well as for businesses and organizations alike. We make ordering custom lapel pins simple.

You can get a free quote or give us an email with any questions about your American flag pin. We offer exceptional quality and outstanding designs, and we can make ordering a custom American flag pin easier than ever! Let the LapelPinSuperstore take care of your next order!